I speak French with an accent, does that affects me?

This is a question that might seem strange to anyone.

And yet, a fear that is sometimes hidden, rarely expressed out loud – and for good reason – many of you legitimately ask the question: is my way of speaking French an obstacle to my application or to my integration into the school I wish to join in France? 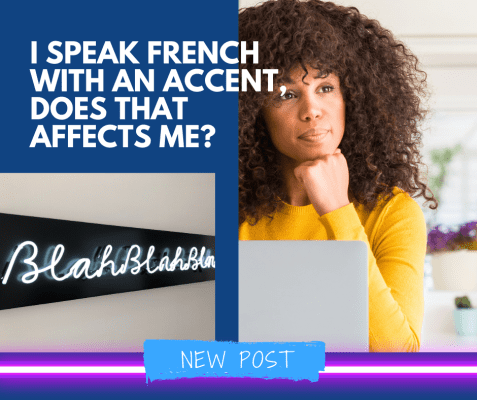 It is a certainty that the French language is necessarily tinged with regional and even local habits and everyone, with more or less frank and audible intonations, reflects a way of speaking, a specific accent, typical phrases or expressions.

For example, a student from Lille will probably not need more than 30 seconds to identify in a simple discussion a colleague from, say, Montpellier. A student from Nice will probably quickly realise that he or she is talking to a student from Brittany in the Rennes area. And these are just examples, each locality in France can boast its own accents, its own expressions, its own language. The Parisian “titi” is no exception to the rule, even if in this region, the mixing of populations blurs the lines a bit…

In any case, there is no recognised standard of pronunciation. Pronunciation is not like spelling or grammar and its variation contributes greatly to the beauty and richness of the language.

Imagine a language without accents, it would be cruelly lacking in interest, rather like a dish without salt or spices.

The fact that your pronunciation in French gives off accents from elsewhere is not and should not be a source of anxiety. Remember that everyone, even in France, naturally reveals a little of their origin when they express themselves.

So don’t be afraid to express yourself freely, do it without worrying about the perception of your interlocutors: the most curious may not recognise the particular musicality of your words and will surely ask you where you come from… as they would with a Corsican, Alsatian or Toulouse accent, different from their own.

And if you should happen to encounter “glottophobes” – since this neologism exists (people who despise others because of characteristics of their speech such as accent or syntax) – well, skip it.

You are welcome in our schools! Together, our differences are our wealth.